Drilon as minority leader and liberal party, will lead and should protect his cousin former Mayor Jed Mabilog, from Death Penalty.

August 2016, Jed Mabilog was in the Narco List / Drug Lord of President Rodrigo Duterte. During that time, Jed Mabilog escapes and went out of the country, which President Duterte questioned the US Embassy for the issuing visa of Jed Mabilog, after giving the narco list to the embassy.

Jed Mabilog was also dismissed from his position as mayor for graft case.

During the Aquino Administration, where De Lima was the Secretary of Justice, the drug trade was very rampant in our country, where Duterte discovered, inspected, raid Shabu laboratories in Marikina, Pasay, Zambales and Tarlac. 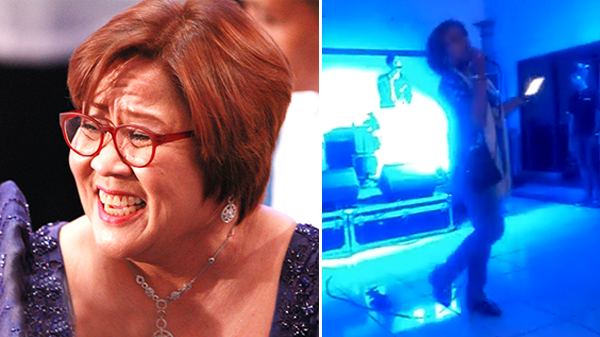 Herbert “Ampang” Colangco, a convicted bank robbery gang leader / drug lord who appeared to have turned his kubol inside the New Bilibid Prison into a recording studio, held a concert in a hotel in Pasay City last September despite having no authorization.

“Today I weep for my former colleague. A COA-UN auditor who just died of a heart attack. He is the auditor behind the DoH report. Stress can kill, please let us offer a minute of prayer!” saad ni Mendoza nitong Martes.

“Sa Team Leader ng DoH, Jake, may the heaven open up and receive your soul together with all our prayers for the country and the institution we served! Condolences to your family and the COA family, especially the Resident Audit Team in the Department of Health,” patuloy niya.

“As if not enough Jake, the Team Leader of DoH, is also the one behind the DICT audit report. Audit is life! And I’m sure you will be at peace because you have lived a life meant to serve many! My prayers and gratitude,” wika ni Mendoza.

Why Do Most Filipinos Support President Rodrigo Duterte Till Now?

Why Do Most Filipinos Support President Rodrigo Duterte Till Now? - Alon Calinao Dy

This is a question I always ask to myself. Why do many Filipinos still support the very simple and truly honest Mayor Rodrigo Duterte? Every time my bashers told me, “Mr. Alon Calinao Dy, you’re a Dutertard!” It simply means a fanatic of the President. Well, I truly appreciate his strong commitment for the Filipinos and for this country.

Like most common Filipinos, I admired President Duterte for being simple, brave and honest leader of this country. He risked his life for the Filipinos who supported him and for making Philippines a better place for everyone and by battling against oligarchs and powerful families who controlled illegal drugs, criminalities and rampant corruption in this country. Who would do these courageous acts? only President Duterte!

This is a wonderful quote of former President Ferdinand Marcos when he was still alive, “no matter how strong and dedicated a leader may be, he must find root and strength amongst the people. He alone cannot save the nation. He may guide, he may set the tone, he may dedicate himself and risk his life, but only the people may save themselves.”

I love this popular quote because it just shows that even though we have an outstanding president right now who cares for the Filipino people, it’s not enough without lasting peace and unity among ourselves. President Duterte is one person, he may be the powerful person in the country, but his real power comes from Filipinos who voted and supported him.

Duterte can inspire everyone to do good things. But it’s up for every Filipino if they’re willing to change for the better. And no matter how good you are to people, it doesn’t matter to them and there will be always people criticizing you. That’s why this quote is true “you can’t please everyone.” But all you have to do is continue what you think is right for the country.

If only social media existed before, truth could save us all than the lies spread faster on some TV networks. The moment I watched some TV news in the Philippines who had spreading ‘fake news’ and propaganda against the president, I stopped watching the news as it only divided Filipinos politically.

The truth is, The Real Change is in you…The Real Power is in your hands. Altogether You can change the Nation. Sad but inevitable truth, President Duterte will soon retire and out of the office. But after many years from now, aside from other excellent jobs, Filipinos will always remember him for his ‘Build, Build, Build,’ project as could become his legacy for sure.

‭‭Philippians‬ ‭2:3-4‬ ‭ESV‬‬
“Do nothing from selfish ambition or conceit, but in humility count others more…

Why Do Most Filipinos Support President Rodrigo Duterte Till Now?

US immigration agency to close Manila office in July